Some months ago I ordered a new lot of 12” 20 gauge needles from Fisher Scientific.  When they came I noticed that the box had a sticker that said Cadence Scientific instead of Popper and Sons.  I took out three needles and very carefully rolled them between a countertop and a semi-truck tire gauge (aka the steel mandrel).  I basically did a combination of rolling and also pulling (gently) the needle and the needle hub (as needed) to get the needle to bend in a nice symmetric gradual bend.  Well, when I went to use these needles I found that under pressure they leak at the junction between the needle stem and the hub (all three)!  I’m going to comment further in a separate post about the nightmare I went through trying to get Fisher to simply send replacements.  Anyway, after a long drawn out ordeal I ended up hand bending several of these needles from the same lot (as I had previously hand bent about 40 20 gauge 8” and 6” needles from different lots and none had leaked).  Oddly enough when I hand bent the 12” 20 gauge needles they didn’t leak.  Can someone tell me why the mandrel bent needles leak and the hand bent don’t even though the radius of the bend in the former is more gradual than that for the latter? 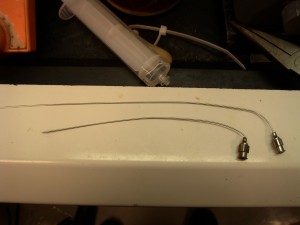