For those conducting air-sensitive chemistry gas-tight syringes are a necessary item in your chemist’s tool kit.  The following blog post is based on personal experience of the author after having used syringes of varying styles from different manufacturers.  This review will be followed by subsequent postings upon completion of additional testing.

Syringe design:  For people conducting serious chemistry I suggest using only syringes that have the Luer-lok fitting where the inner cone is constructed of PTFE or a similar inert thermoplastic.  This allows for secure attachment of needles, reducing the likelihood of a needle coming free of the syringe during critical manipulations and yet needles are easily removed for cleaning as they do not bind to the cone material.  I do not suggest syringes fitted with ground glass male, slip-on type fittings that fit inside of the needle hub for several reasons.  First, they have the tendency to snap off the end of the syringe with minor disturbance from the chemist (e.g. minute bumps).  Secondly, for the many air-sensitive reagents that like to form metal and nonmetal oxides when exposed to atmospheric moisture (e.g. Al2O3) this type of fitting easily becomes glued to the needle hub as minor amounts reagent trapped between the needle hub and glass stem become hydrolyzed.  One solution would be to coat the ground glass stem with a chemically inert lubricant (e.g. Krytox®); however, doing so would potentially sacrifice the security of the needle. When possible, use of syringes fitted with removable Luer-lok fittings are highly recommended (first picture below).  First, their removable nature allows ease of cleaning.  Secondly, if the cone material becomes worn from repeated use it is easy and very cheap to replace whereas if the cone of a fixed Luer-lok fails the entire syringe barrel assembly must be replaced and this is costly.  One other comment is that I do not suggest purchasing syringes that possess a glass face to which a Luer-lok fitting is connected (second picture below).  This design is prone to stress fracturing if you have a heavy hand like me and attempt to force contents under gorilla pressure.  A much better alternative is to use syringes that have composite metal/PTFE faces (first picture below).

Syringe brand:  The following is my ranking of syringes based on manufacturer (for small volume gas-tight syringes ≤ 1 mL) in terms of decreasing quality.  Hamilton > Kloehn > Target.  Concerning the last of these brands I have found that at times the Luer-lok itself didn’t seem to be properly cast/machined and at times obtaining a perfect mating of the needle hub to the Luer-lok cone material could prove difficult.  I cannot comment on small volume gas tights made by SGE (as I have never owned one); however, since their large volume gas tight syringes are in my opinion the absolute best, my guess is that their smaller counterparts rival those made by Hamilton.  As for large volume gas tights (≥ 10 mL) my experience is limited to those produced by Hamilton and SGE.  I highly prefer the latter brand as in my opinion they are of higher quality overall and are available in removable Luer-lok configurations.

Gas-tight valves:  I wanted to mention that of the gas-tight syringe valves that I’ve used (which fit between the Luer-lok and the needle hub {last picture below}) of all the types that I have tested the push button variety manufactured by SGE functioned the longest without failure.  I do have to note that the plastic knob on the push-rod did eventually fracture even though the valve remained leak free.  I have used countless other varieties (most sourced from Aldrich) and do not suggest them for demanding reagents (e.g. BBr3). 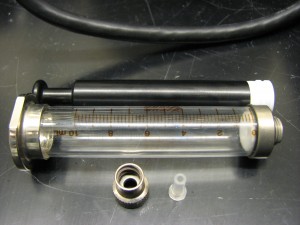 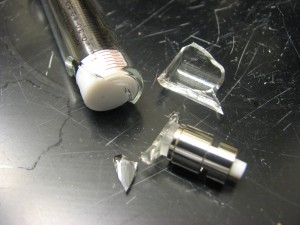 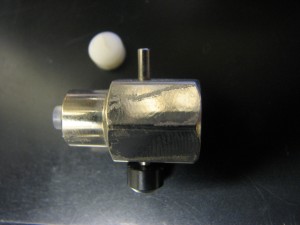