As my suspicions grew and I became more vocal about them an unusual accident occurred which almost decapitated me.  While working in one of “Kennedy’s” state of the art dry boxes (sarcasm implied) an explosion occurred while I attempted to increase the speed on an electric stirrer.  These boxes were crudely constructed and always possessed such a high moisture content that withdrawal of TiCl4 from septum sealed bottles always resulted in the generation of so much HCl that it obscured the view from the front window to the back window (these boxes had two sets of gloved windows opposite to one another).  At the time I was overly ignorant about what a proper glove box looked like and obviously what a good versus bad atmosphere behaved like.  In this instance it would appear that oxygen, a contaminant that is difficult to exclude with this sort of glove box was the culprit in starting this explosion (in addition to the obvious glaring safety violation of using a non-explosion proof motor in a dry box containing about 15 L of highly flammable heptane in addition to several mL of even more highly flammable IB and methyl chloride {MeCl})!  I should mention that the collection method used for both IB and MeCl always involved loss of no less than 5-10 mL of condensed liquid (which quickly volatilized to gas) to the glove box atmosphere.  These problems were no doubt compounded by poor techniques that were common practice in the “Kennedy” lab such as the use of only purging to bring in certain items as opposed to the standard pump-refill technique.  Regardless, even though I escaped harm and no one else was injured and furthermore, I was able to prevent a serious fire from developing (despite safety glass being flung about 20+ feet {see pictures and documents below}) the accident did not improve my relationship with “Kennedy.” 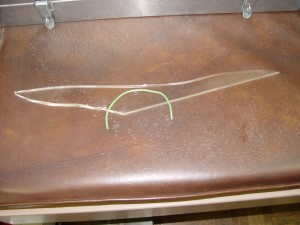 This is a fragment of the window pane and a piece of wire that may have come from the electric motor. 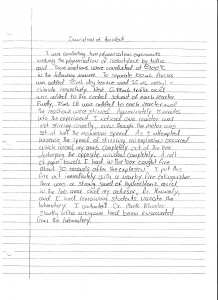 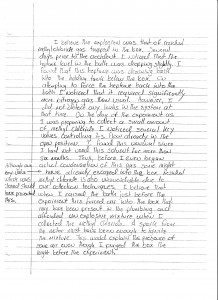 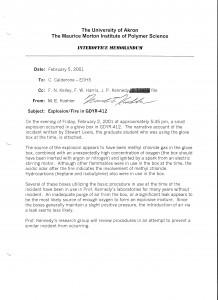 UA memo.  UA never investigated this matter to determine if the accident may have resulted from an attempt to kill Dr. Lewis.