As part of an ongoing investigation of mine I am offering up to a $1,000 reward for information on an individual who has gone under the assumed name of Joseph P. Kennedy.  Below I include two biographical sketches that have appeared in documents for a seminar that was given honoring Dr. Thomas and Dr. Sparks and a flier that appeared celebrating this man’s 75th birthday, respectively.  Free use of these materials is claimed since neither document carries copyright protection and because both documents are related to an ongoing study that has academic implications in addition to others.

Information that can be submitted for cash rewards (adding up to $1,000) includes the following:
1.    The original name of this individual.
2.    Birthdate and place.
3.    Names of parents including mother’s maiden name.
4.    List of schools attended prior to college.
5.    Date and place during which this individual changed his name.
All submitted information must be verifiable in order to qualify for a cash reward.  Submissions will be treated in a confidential manner.  Further documents relating to this individual (previously disclosed in the public domain) will be released in the future and the reader can come to his/her own conclusions concerning the information contained within them. 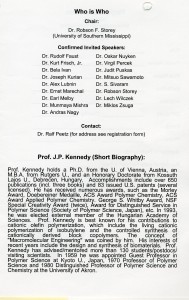