Once “Kennedy” had fired me I looked up Paul F. Buzzi, Esq.  Of the many people whom I have met in my life, Paul is without a doubt one of the most upstanding.  I recall somewhat vividly how Paul described the sinful and hypocritical lifestyle he used to live, getting high with judges in Akron (ones who sentenced others involved in drugs to prison).  Ultimately Paul got hooked on another drug, Jesus juice, and his addiction had dramatic positive results.  Paul waited for an answer from the Polymer Science Department at the University of Akron, but none was to be had.  Meanwhile, for the next 1.5-2 weeks my status as a student was apparently in a state of limbo and it wasn’t until I ran into the head of the Polymer Science Department (Dr. William {Bill} J. Brittain)* that inquiries were made into the previously described events.  When I ran into Dr. Brittain the first thing he said was something to the effect “Mark Kohler asked me if you were to still have clearance to the building and I wondered what was going on.”  So within a day or two latter I arranged to meet with Brittain and told him the entire series of events that had transpired.  Brittain asked me what I’d like to do and admitted that the events were gross misconduct on “Kennedy’s” part.  I told Dr. Brittain that all I wanted to do was simply finish my Ph.D. seeing all the time I had invested.  I was then immediately moved into a new research group that had shown up at U. Akron, that of Dr. Scott Collins.  I was also informed that this move would be most ideal for me seeing that Collins had a project centering on IB polymerization and I was already somewhat well versed in the area.  Having few options at my disposal and a great desire to get my degree and get the hell out of the shithole of Akron I accepted this arrangement.

* I was well acquainted with Brittain having finished a M.S. under him instead of a Ph.D.  At this juncture I cannot say anything overly good or bad about him.  During my stint in his lab I learned absolutely nothing of value in terms of synthetic laboratory techniques.  What I did learn was how power corrupts and how that corruption can destroy people’s lives.  Without going into detail at this moment (and I have plenty of documentation on file that I can post) one need only look at court records pertaining to him in the 90s as well as awards granted through the Polymer Division of the ACS to students (during the time that Bill chaired this division) to figure out what was going on.  Remember, this is the time of Monica Lewinsky…

Again, I noticed that whenever I tried conducting experiments using Yb(OTf)3 in the absence of Stas there was never any product.  Finally, I demanded to see some of his samples.  Despite having run many reactions, each of which made multiple gram quantities, Stas was only able to supply me with a couple (ca. 3) samples in small vials (< 1 g).  Upon testing them with a number of analytical techniques including GPC and 1H NMR I discovered them to be polydimethylsiloxane and not PIB (see files below this paragraph)!  Indeed, I now had positive proof of falsification of data.  Immediately I setup a time to present this evidence to “Kennedy” and when I did the same result occurred.  This time around not only did “Kennedy” tell me he only cared about data but he informed me that I needed to consider if I wanted to continue to work for him.  I was to have a response to him within 1-2 days.  When I met with “Kennedy” the last time I informed him that I would do anything to continue working under him with the exception of falsifying data.  It was then that “Kennedy” called in his secretary at the time, Debbie England, and began to ramble off false allegations about how “Stewart has failed to fulfill his obligations to me.”  I stopped him in mid-sentence and told the two of them that I need not listen to this crap anymore and that I was going to get an attorney.  The very next day, “Kennedy” left the country for Europe.

Following the accident (of which U. Akron never supplied me any photos of despite EOHS taking numerous pictures) “Kennedy” had me back to working on polymerizations and requested the construction of a less dangerous cooling bath.  Despite having spent almost one month on the construction of this bath, “Kennedy” decided to not use it.  During this period my relations with both Stas and “Kennedy” continued to deteriorate as I was never able to reproduce any of Stas’ results in the area of the Yb(OTf)3 polymerization system (please see files below this paragraph).  Likewise, Stas began acting unusual and his physical appearance, odor, and physiological responses began to take a weird turn.  For example, on numerous occasions he acted paranoid during experimentation.  According to him, failure was certain unless I did as he said.  He also appeared to be either drunk or sedated by some sort of drug and his body odor at times had become so unpleasant that people could not stand to be in the same office cube room as him.  While working in complete air conditioning he would begin to sweat profusely as if he was running a marathon.  As I continued to question his previous results threats were being lodged against me, death threats.  These threats were of such a grave nature that I had to begin locking all personal belongings in a filing cabinet to prevent the possibility of being poisoned.  A friend of mine, Mr. S. Carrolla and I approached “Kennedy” about Stas but as per usual “Kennedy” did nothing. 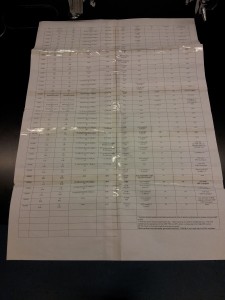 (This is a picture of a master table of experiments Dr. Lewis conducted in an attempt to replicate work originally reported by Stas and Dr. “Kennedy”)

Yb master table summary 4-24-01 (this file contains tabulated data necessary to construct the table shown in the above picture).

I soon began to suspect that “Kennedy” was possibly the mastermind behind the entire fabrication of experimental data.  During several group meetings between the three of us “Kennedy” would make unusual comments.  For example, after Stas started to become somewhat belligerent during one meeting “Kennedy” stated, “You know Stas, Stalin wasn’t a bad guy.  He did many good things.” To which Stas replied, “Dr. ‘Kennedy’ you should not say these things.”  While attending these meetings I kept voicing my concern over the fact that Stas did not possess any physical samples of the polymers he had supposedly made.  “Kennedy’s” reply to me was, “I don’t care about samples.  Go into the lab and make me data.”  It seemed as if my assumptions were true.  To me it would appear that the entire thing was fake from the very beginning and both Stas and “Kennedy” knew it.  Still, I wasn’t sure as “Kennedy” didn’t give me a direct order to falsify data, but what else could “Go into the lab and make me data.” mean if physical samples were not important?  Regardless, my conscious is such that even at that time doing such a thing was impossible for me.  So, I returned to the lab once more (at least for approximately one more week) to conduct some final experimentation.