When I first set foot into Dr. “Kennedy’s” laboratory at the University of Akron I noticed a stark difference between it and the bulk majority of synthetic laboratories in the polymer science department.  Some of the first things that were obvious included the antiquated pieces of equipment, the limited selection of glassware, and the large quantities of old reagents strewn here and there.  Even more shocking was that the more time I spent in this laboratory I encountered even more deplorable conditions in terms of cleanliness, upkeep, and reagent storage (please refer to photos below).  Due to my limited experience as a chemist I did not fully grasp the dangers that this laboratory actually posed, and later the reader will see that I wish I had been cognizant of the hazards contained in this laboratory. 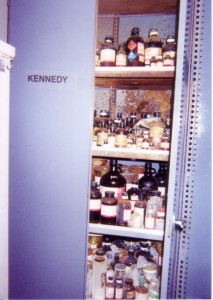 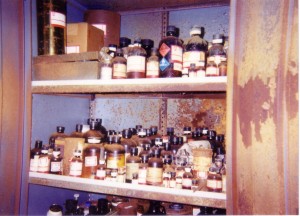 Some may ask why I am taking the time to write this blog series.  The simple answer to that question is that this will (in part) pave the way to correcting a number of crimes that were committed against me while I studied at this University.  Let me make it clear to the reader that all of the information contained in this blog series is factual and I will stand by it in any court of law.  In this series it is up to the reader to make conclusions based on the evidence presented and as to the integrity (or lack thereof) of the individuals involved as well as the institution that has employed them over these years.

My Beginnings in the “Kennedy” Lab

In late 1998 (ca. November, 1998) I began working for Dr. “Joseph P. Kennedy” (reader, I put this individual’s “name” in quotations as it is an alias that he picked up apparently sometime in Europe.  I have yet to meet a single person who knows this person’s true name or his true background!).  From the very beginning I realized that this was a unique experience.  Prior to being accepted into the research group he gave me what was in effect an interview which also required submission of a resume and grade transcripts.  When it was decided that I was worthy of inclusion (please see research group photo below) Dr. “Kennedy” delivered a grandiose speech.  During this speech he informed me that he would “protect my soft underbelly, and my research project would be unique.”  Towards the conclusion of his diatribe, I was asked as to whether I knew of the story of Damocles’ sword.  I admitted to my ignorance of this story and Dr. “Kennedy” filled me in on its details.  According to him, Damocles was made the guest of honor at a dinner given by his enemies and they suspended a sword above his head with a human hair.  “Kennedy” told me “this represents the inherent danger that I face when I undertake new students.”  Little did I understand the hidden messages in the statements he was making at the time.

I have to take an aside here and mention that at the time I was so innocent that I didn’t once think that it was strange for a Hungarian to have the name of an American senator.  Even when some of the postdoctoral students in the laboratory told me that not only was this not his true name but asked me if I understood what side of WWII Hungary was on the message still really didn’t register.  Not only was this man’s name stolen, but “Kennedy’s” Damocles speech was also in fact stolen (almost verbatim) from a speech delivered to congress by President John F. Kennedy!  I found this out while watching a documentary on the History Channel.  Now, back from my digression.

The first order of business that had to be taken care of was to determine the research project.  During this period I was advised by Dr. “Kennedy” to seek the help of other faculty in the polymer science department.  This included Professors Harwood and Reneker, as well as a visiting scientist Professor Teyssie (please see PDF files below).  At this time I did not have much in the way of inventive skills and many of the ideas that I devised were more or less step change improvements to chemistry described in “Kennedy’s” books or described by others such as Professor Wilkes.  After presenting my ideas and asking them for help, each of these professors submitted additional ideas to me (Harwood making the offhand comment, “why should I give all my ideas to Joe?”).  Another unusual thing happened during this time but again I was too blind or too naïve to see.  Dr. “Kennedy” requested photocopies of all documents that we were to discuss during our group meetings.  Below you can find PDF files for the original copies as well as the photocopies of the originals (which he normally retained), the latter which have Dr. “Kennedy’s” hand writing.  This is one of few instances where I was able to retain the photocopied documents as I soon learned “Kennedy’s” standard modus operandi was to collect these photocopies into cabinetry located directly behind his computer desk that faced the door.

During the review of these ideas Dr. “Kennedy” shot most of them down.  One humorous comment that “Kennedy” made to me concerning polyisobutene (PIB) based ionomers was “Storey steals my best ideas.”  Although I have never met this individual my guess is that this is far from the truth (i.e. Professor Storey devises his own ideas).  In the end, Dr. “Kennedy” decided that the best project would involve the preparation of PIBs bearing reactive silyl end groups, followed by subsequent hydrolysis/condensation to yield PIB stars with a silsesquioxane core.   Much of this chemistry was derived from work described by a Professor Wilkes whose papers “Kennedy” originally referred me to.  Again, my ignorance got the better of me.  Some years later, while reviewing the chemical literature and remembering that at least one Japanese visiting scientist had been working on somewhat similar chemistry did I realize that this idea was no doubt closely related to work that had been done by this Japanese chemist who had most likely left photocopies of his ideas with Dr. “Kennedy”.  Evidence supporting this will be shown in a subsequent blog posting in this series.