My intention was originally to entitle this blog as, “Best Worst Gloves” but the software used to construct these blogs would not allow me to use the strikethrough in the title caption.  This posting concerns nitrile gloves manufactured with the following identifiers (Best® brand, 15 in 22M SZ 9, REF # 737-09).  THESE GLOVES ARE FAULTY AND SHOULD NOT BE USED UNDER ANY CIRCUMSTANCES WITHOUT THE USER DONING A SECOND PAIR OF GLOVES UNDERNEATH THEM!!!  I am not exactly certain what the cause of the defect is (I believe it is improper cure) but these gloves cannot handle caustics despite having a high rating of 6.  Below I include photographs of a defective glove that show numerous cracks that have formed in it after being subjected to use in a standard glass base bath.  I estimate that this glove saw a total of about 20-40 minutes of service before failure occurred.  Due to the faulty nature of these gloves I have now suffered two burns in part due to the fact that previous experiences with this same sort of glove (different lot) have never resulted in failure after many hours (ca. 100) of use under identical circumstances and thus I was not in the habit of wearing secondary gloves underneath. 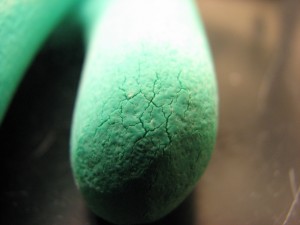 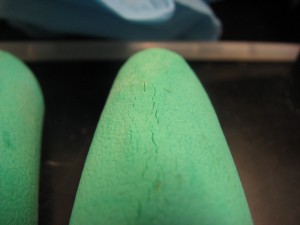 Several months ago I spoke with a Mr. Brown from Cadence Scientific in context to problems I was experiencing with needles produced by this company.  The basic symptom was leakage at the junction where the needle stem connects with its hub and this seemed to be exacerbated depending on the method used to bend the needle.  This leakage did not occur in older lots of needles which had the Popper and Sons label on the box that they come in.  Mr. Brown told me that these needles are formed by a press on manufacturing process and the only way to have a completely leak free needle was to use needles that had their stems welded to the hub.  As for the leak free performance of older lots of needles I was told that possibly machinery had worn to the point that construction of newer lots were not of the same quality as those made some years back.  Below I include two photographs of a catastrophic failure that occurred on a lot purchased from Cadence Scientific this year by a friend of mine.  In this instance the needle was never bent; however, the stem of the needle actually pulled free from its hub once withdrawn from a GC septum.  The needle had only seen very light use prior to its failure.  The bottom line to the reader is to proceed with extreme caution when using needles from this company. 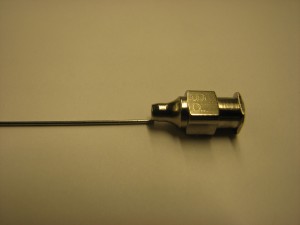 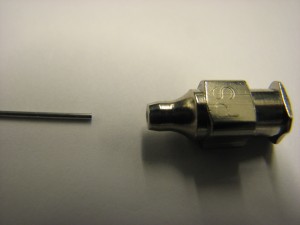